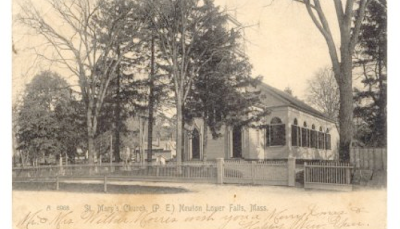 On Sunday, April 28 at the 10:00 a.m., we will continue the celebration of our bicentennial year
with a Historical Worship Service.  The service will be different from our weekly service in a number of ways.  First, we’ll be using the format and words from the 1789 version of the Book of Common Prayer, we’ll offer both Morning Prayer and Holy Eucharist (as was the custom of the day).  Second, each pew will have the name and occupation of its original owner.  Finally, our choir will be leading us using music from the history of our parish.
As I’ve prepared for the service and retyped the words from a tiny original 1789 Book of Common Prayer, belonging to “Mrs. Goodrich, of pew 24” I’ve been struck by the different theology expressed in the words offered by the clergy of that era.  Following the service, over coffee, we’ll have a chance to talk about your reflections.  Please invite your history loving friends!
–The Reverend George Stevens
Music for St. Mary’s Historical Service
As we step back in time at the “historical service”, the St. Mary’s Choir will sing music written by two American composers, William Billings and Horatio Parker.  Each represents a distinctive musical style and a specific period in St. Mary’s history.
William Billings (1746-1800) was a Boston composer who is often regarded as the father of American choral music.  His first collection of music, The New England Psalm Singer, was published in 1770.  Although we have no records of the music sung at St. Mary’s when the church was founded, it’s possible that the music of Billings was heard here in the early years, since Billings was a local composer and his sacred compositions represented a uniquely American sound.  His settings are sung “acapella,” without instruments or accompaniment.  The choir will sing his setting of Psalm 19, The Heavens Declare, which was originally published in The Continental Harmony in 1794.
Horatio Parker (1863-1919) is another important American composer who lived about 100 years after the founding of St. Mary’s.   He was born in Auburndale, studied music in Germany, served as organist at several important parishes in New York City as well as Trinity Church in Boston, and was a professor of music at Yale University for 26 years.  He has a particular connection to St. Mary’s because he and his wife are buried in our churchyard, along with his parents and other Parker families.  He wrote several hymn tunes that were published in the 1916 Hymnal (and subsequently in the 1940 Hymnal).  We will sing two of them – Auburndale and Foundation.  As you will hear, his music is Romantic in style, with chromatic harmonies and key changes, in contrast to the stark sound of Billings.  At the Offertory, the choir will sing a movement (Offertorium) from Parker’s Communion Service in E written in 1892.
The congregational hymns for the “historical service” are drawn from the records of the 75th Anniversary services for St. Mary’s held on September 29 and 30, 1888.  The texts of a few of the hymns (Christ is made the sure foundation, Blest be the tie that binds) may be familiar to us 125 years later, but they may be paired with tunes we do not expect.  Or we may recognize the tune, but not the words.  Hopefully, as we sing this music, we will hear its message again, as those who went before us heard it, and it will strengthen us for the journey into a new century at St. Mary’s.
–Kirsten Johnson